A couple months ago, Gordon sent me a link to the Nevada Northern Railway’s first annual Iron Horse Cook-Off Challenge with a message that just said, “Can we enter? Can we? Can we?” Contestants would be judged on three meals: one cooked over an open fire, one on the stove in the caboose, and one on a shovel in the firebox of the engine.

We had never been in a cooking contest before, but we did make engine block quesadillas during a solar eclipse. You’d think those skills would translate pretty well to cooking on a shovel in an 800-degree steam locomotive. Plus, they offered points for dressing in period-appropriate railway attire, so we were guaranteed to get more than zero even if we burned all our food to inedibility.

So we signed up. And bought overalls. And Gordon made watch chains for our pocket watches. We chose the team name Lizard Scorchers (railroad slang for the dining-car chef) and Gordon screen printed bandanas and aprons to match. We couldn’t really practice the firebox cooking, so we picked a menu full of things we’d made before, overpacked the van with everything we might need, and drove to Ely, Nevada.

Our contest entry included a free train ride when we arrived. If you’ve never been to the Nevada Northern Railway Museum, you should go. You can take tours of railroad buildings, see artifacts, meet Dirt the cat, and take some historic train rides. We had been before, but this time our train ride included some terror, since we’d be competing in the morning and didn’t really know what we were doing.

Fortunately, no one else was entirely sure what we were doing either, since it was the first year of the competition. So after a lot of wandering around, a brief orientation, and lots of excitement over railroad history, we got serious. Or, rather, we went to the store for a few more items. We saw one of our competitors there and were tempted to follow him around to scope out his recipes, but we didn’t want to make it weird. So we checked into our extremely sketchy hotel and went to dinner instead.

Our first inkling that we may be over-prepared came when we showed up two hours early to set up our pop-up tent and cooking station and didn’t see anyone else (including staff) for a full 45 minutes. What really drove it home, though, was sharing our extra tables, utensils, and ingredients with the competition (one of whom flew across the country and didn’t pack a table, and the other who joined the competition that morning when he found out he could). We brought way more than we needed, and it worked out for everyone.

Our first win of the day was the coin toss to decide order. We decided to do breakfast, lunch, and then dinner so we’d have some extra prep time for the harder meals. There is a video somewhere of our obvious relief.

I have very few pictures from the contest, because I was busy being frantic.

For breakfast we decided to make S.O.S over hash browns, fried quail eggs, and waffles. We figured the quail eggs would be impressive, we’d get authenticity points for the cast iron waffle iron (which looks like it came from the 1870s but is actually new), and everyone would feel full from the hash browns and gravy. 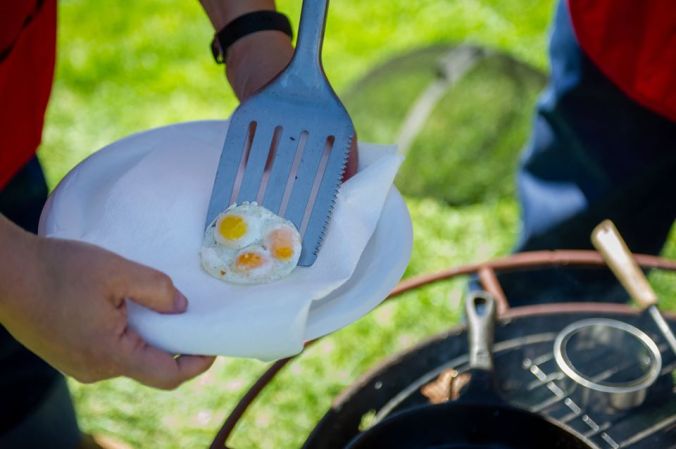 The fire was lit in a fire pit with a grate, so we just used a cast iron pan to cook instead of our home-forged Dutch oven stand.  The strangest part was having tourists walk past to ask us questions about the museum (some of which we could answer) and asking for samples (which was apparently a health code violation, so we had to tell them no).

Overall, we managed time well, finished everything we meant to, and introduced several new people to the joys of quail eggs.

This one was actually the one we were most worried about, since we weren’t sure how hot the top of the stove would be and we’d planned to make pasta. Unfortunately, the water didn’t really boil. Fortunately, we’d brought some black bean pasta that can cook in warm water in very little time just in case. Bonus, the black pasta covered with browned butter and mizithra cheese looked very fancy in the end.

We also made caprese garlic bread with fresh mozzarella, tomato, and basil. We put the bread behind the stove to melt, but in the end Gordon just had to open the door to the stove and hold the bread in (he wore a glove) to get enough heat. He did the same thing with the browned butter and the pasta. We also made a tiny cake in a can for dessert, but it only needed to be warmed through so it worked well.

Now you know: if you’re going to cook on a caboose stove, don’t plan on having a lot of heat to work with on the surface.

This was the most fun, scariest, and most heat-exhaustion-inducing part of the contest. We had been warned that the firebox would range anywhere from 500 – 800 degrees and we shouldn’t expect any sort of consistency. We had cooked over a lot of open fires before, so we figured we’d just watch everything carefully and bring extras in case of accidental incineration.

We decided to pull out all the stops with chicken Alaska (grilled chicken with crab Hollandaise), steamed crab legs, grilled asparagus, rolls, and banana boats for dessert. Gordon was in charge of running the shovel, because I can’t be trusted to not burn myself (just ask the burn scars on my hands/arms). 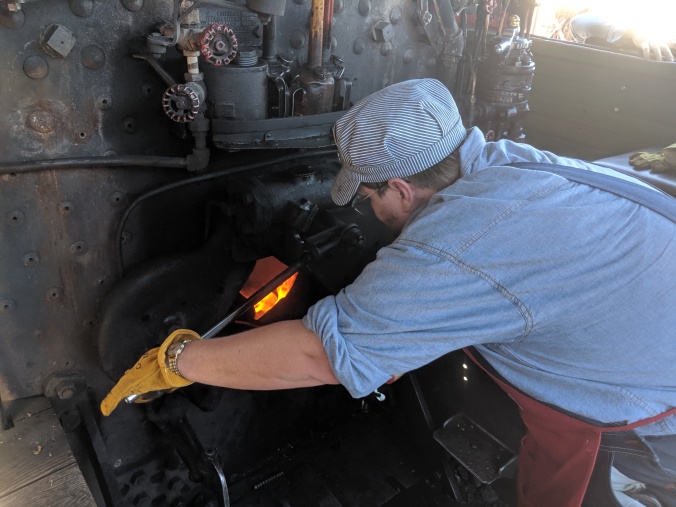 Our chicken Alaska recipe actually came from our first trip to Ely and the Cell Block Steakhouse. I made the Hollandaise sauce in a small pot so we could put it on top of the firebox. Unfortunately, it had the same problem as the caboose stove, so Gordon ended up balancing it on the shovel and putting it over the fire to thicken. Everything else, however, went beautifully. Gordon would put the food on the shovel in the fire for 20-30 seconds, then pull it out to flip/rotate/check for doneness. As things finished, we wrapped them in tinfoil and set them off to the side, where they’d stay warm in the hot as hellfire engine.

Gordon definitely got a touch of heat exhaustion, but the end result was spectacular. The judges just laughed when they saw the full crab legs draped over the box and the non-judge employees crowded over for a taste.

By that point I was pretty confident that we had a good chance. Gordon was sure we’d won.

The judges deliberated while we cleaned up and got our heart rates back to normal, then had an awards ceremony in front of the train. And we won! We reveled in our Grand Championhood and sent pictures to our families for validation.

The rest of the afternoon was spent riding the train some more and feeling really pleased with ourselves. In addition to our sweet plaque, we got to keep our seasoned shovel.

We had a lot of strange questions from friends and neighbors about our weekend, so that was fun. We started eating chicken Alaska way more often. And now any time we make any of those dishes, we get to call them “award-winning.” We’re insufferable.