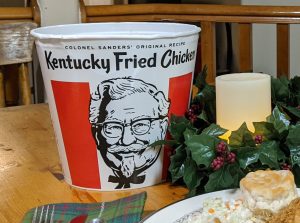 Every once in a while, someone has a stroke of marketing genius that influences an entire generation (Ch ch ch chia, Where’s the beef?, Got Milk? etc.) On the Second Day of Imported Christmas, we are celebrating one of the most effective marketing campaigns of all time: the KFC takeover of Christmas in Japan.

In 1974, the fledgling Japanese KFC franchises needed a boost. Takeshi Okawara, the manager of Japan’s first KFC, decided to take advantage of the lack of Japanese traditions for Christmas (which was largely not celebrated at all except by foreigners, who couldn’t get their traditional turkey ). He launched a campaign called “Kentucky for Christmas” and offered a Christmas party barrel that started with chicken and evolved to include sides, cake, and optional KFC wine.

You can order your own at kfc.co.jp, as long as you’re in Japan

The campaign was a runaway success, and Japan became KFC’s largest foreign market. According to the BBC, 3.6 million families in Japan now eat KFC for Christmas. You have to order your Christmas chicken weeks (or months) in advance and wait in long lines to pick it up, but nothing says Christmas quite like eleven deep-fried herbs and spices.

We already have plans for Christmas dinner, so we celebrated Japanese Christmas early. We did have to explain to our guests that it wasn’t that we were too lazy to cook for them, we just wanted to expand their cultural horizons by feeding them something they’d all had before. Of course, we added all the pomp of Christmas celebration to make it extra special.

We don’t mind being influenced by great corporate marketing techniques. It was delicious.