After Gordon finished building his black powder rifle, he decided he wouldn’t be able to look actual mountain men and reenactors in the eye unless he also had a powder horn. So naturally, he made one.

We have a local leather store that also sells cow horns. Making a functional powder horn is pretty straightforward. If you want a pretty/fancy/impressive powder horn, you will need to put some more work into it.

You’ll need to seal the large end so you don’t lose any powder. Gordon used a heat gun on the horn and then turned a plug and inserted it into the horn to round it out (Side note: you can make all sorts of things out of horn because it bends so well when you heat it up. Horn spoons and combs for everyone!) Then he turned a prettier plug on the lathe that would fit once the horn was round. He also had to drill a hole in the narrow end (scariest part) and turn a removable plug for pouring powder out of.

Once all the vital elements to keep powder in were in place, Gordon filed down the end of the horn into a design. He also polished and waxed the horn a bit to bring out the colors. 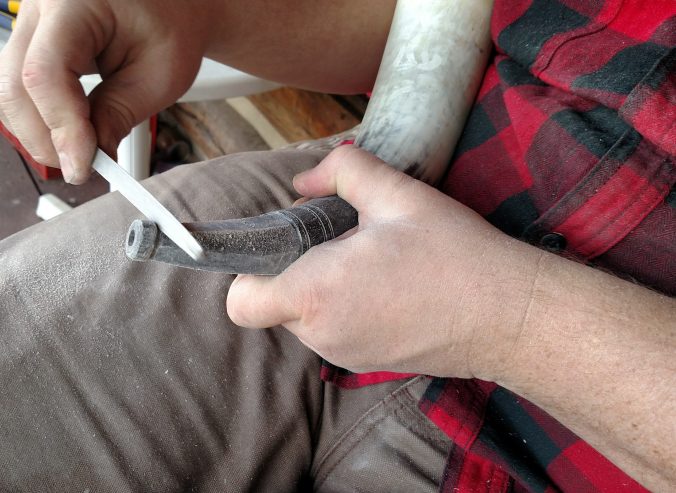 After polishing the top, he glued in the plug in the large end with epoxy and then nailed it around the edge with small brass nails. Pre-drilling the holes keeps you from cracking the horn or bending brass nails. No one in the history of the world has said “strong like a brass nail.” And the epoxy means the nails are almost entirely for looks anyway. 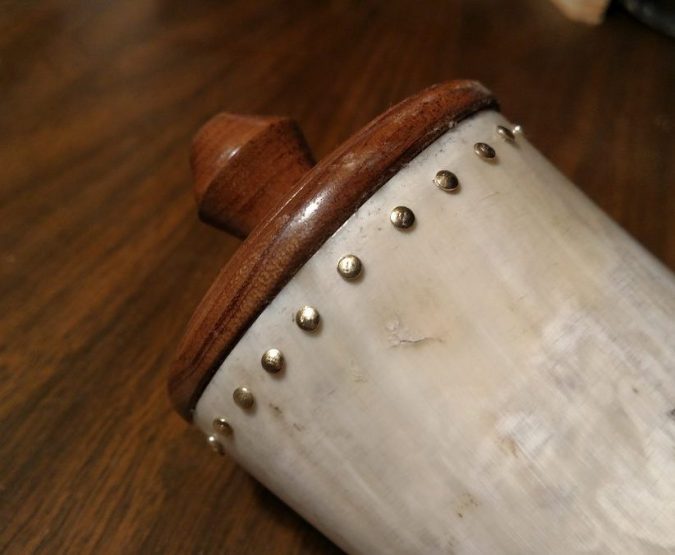 These nails are totally pointless, but they look very authentic

And you’re done! Unless you want to try your hand as a scrimshander. Which Gordon did. More on that tomorrow.

One thought on “Powder Horn”