If all you really care about is how to make a powder horn, go read the other post. If you want to learn the word “scrimshander” and find out pretty useless trivia about Nova Scotia, while seeing more pictures of the powder horn with designs etched into it, you’re in the right place.

Thanks to the Reader’s Digest Back to Basics book, Gordon decided his powder horn wouldn’t be finished until he did some scrimshaw.

Here is what Back to Basics has to say about this American craft: 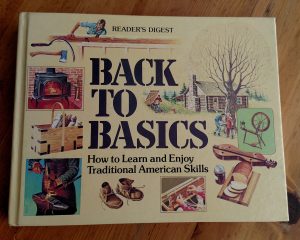 “Scrimshaw—the etching, carving, and coloring of teeth, ivory, and bone—was invented by American whaling men as a way of whiling away the long days and weeks between whale sightings. Whenever a whale was caught, the creature’s jaw was hoisted to the deck with block and tackle and its brown, ridged teeth doled out to the crew. Bone was carved into umbrella handles, canes, pie crimpers, and corset busks—complete with pictures and intimate quotations. Wives or sweethearts often received them as gifts.

Modern scrimshanders, concerned with the fate of the world’s whale population, are turning to new materials, often bringing to them a level of artistic ability that few whaling men could match. But as one visit to a whaling museum’s scrimshaw collection will show, a leisurely pace and an eye for detail can be more important than artistic sophistication in this most American of crafts.”

Gordon’s design was inspired by his time in Nova Scotia hanging out with Atlantic Canadians.

On one side, he etched the Bluenose, a ship that also graces Canadian dimes and license plates. Here is some trivia about the term Bluenoses from The Bathroom Book of Atlantic Canada Trivia:

“Nova Scotians have been called “Bluenoses” or “Bluenosers” since the 1700s. No one is quite sure why. Some say the term is taken from the smears left on fishermen’s runny noses after they’d wiped them with their standard-issue blue mittens. Others believe it is for a type of local potato that had a blue tinge to it. And, in the War of 1812, there was supposedly a Nova Scotia ship named the Blue Nose with a blue cannon on her bow that terrorized American sailors. In any case, the famous Bluenose and Bluenose II  were named after Nova Scotians and not the other way around.”

On the other side, he etched the lyrics to “Farewell to Nova Scotia.”

Ideally, I would have a picture of the finished powder horn in Nova Scotia, with the “briny ocean” and “dark and dreary” mountains in the background. But we live in Utah, so I took it to the Great Salt Lake with Antelope Island in the background. It’s basically the same.

One thought on “Powder Horn Scrimshaw”