Gordon got his first subscription to Popular Mechanics because he had a call center job and subscribed to ten different magazines to stave off the soul-sucking boredom. Turns out, it is now the only one of the ten we still take. We made our first PM project after getting serious sticker shock while looking for a meat smoker and then finding plans in the magazine to build one out of a 55-gallon drum instead. We were hooked. 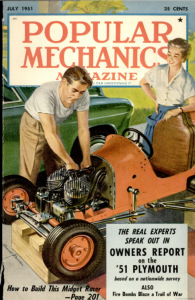 A couple years later, Gordon found several old (we’re talking 1950s) issues at a thrift store and discovered he likes the magazine even better when it’s pretty out of date, so when he discovered Google books had an archive of old issues going back to 1905, he was thrilled. Especially in earlier years, the magazine was full of build-it-yourself projects of varying difficulty. And until October, 1960, the subtitle for each issue was “Written so you can understand it.” It’s every ambitious amateur handyman/electrician/carpenter/boatbuilder/mad scientist’s dream. END_OF_DOCUMENT_TOKEN_TO_BE_REPLACED 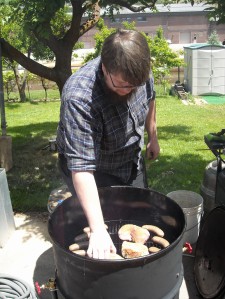 We had been wanting a smoker for awhile, but were not willing to spend the equivalent of two months rent on a Traeger. Fortunately for us, Popular Mechanics came out with plans to build your own for between $50-$100 dollars. Much better!

The plans are straightforward and funny, which makes the process more fun. We highly recommend this smoker, as it has led to countless delicious hunks of smoked meat. END_OF_DOCUMENT_TOKEN_TO_BE_REPLACED